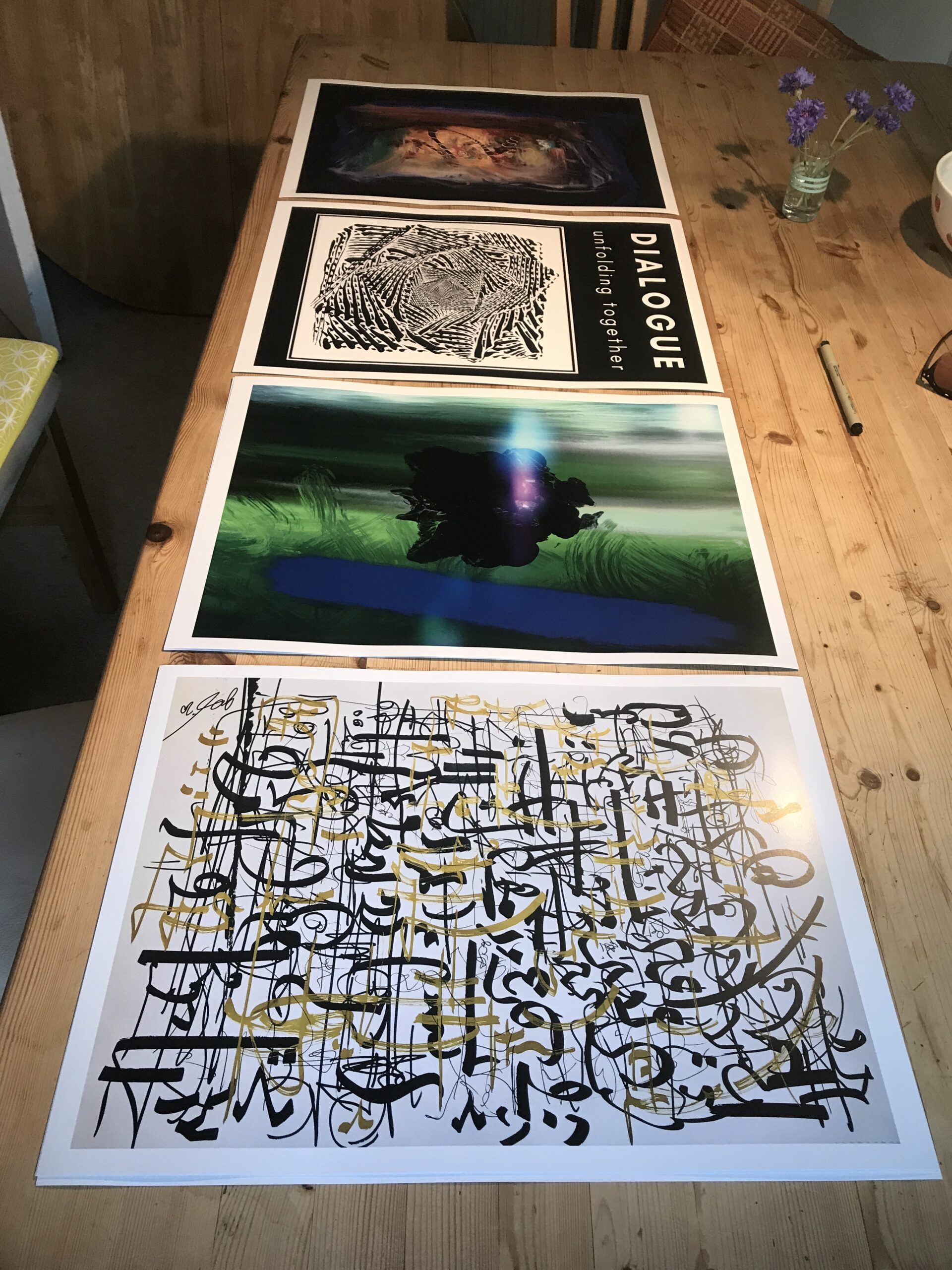 Less these days, I used to make visual artworks, seeking ever-new compositions, manifestations, shapes and letterforms, in timeless nether-worlds of symbols and words of undiscovered meaning.

I began my writing and graphical art journey as a youngster, drawn to rock band logos and embroidering on the back of friends’ denim jackets. Later, while engaged with Islamic mysticism I learned to read Arabic. Short courses in Art & Design, Manuscript Calligraphy, Gilding and Signwork supported a small business teaching and producing plaques and shop signage. I held workshops in artisan Islamic plaque making on exotic wood and vellum for living spaces and had a couple of exhibitions. Large scale work on mosque walls followed, at the same time as making and installing shop fascias around Sheffield using a vinyl cutter or brushwork. I embarked on several retreats and pilgrimages abroad, receiving lots of inspiration from Eastern art.

Whether squirrel-hair brushes for heraldry, gold-leaf gilding on vellum or black calligraphy ink on handmade parchment, the traditions of sophisticated mark-making and graphical artistry hold a deep magic and immediacy, and besides immense tactile appeal, can be made to embody great meaning and message.

In 2009 on the Contemporary Fine Art BA, I spent the whole first year trying to unite my inner and outer world with oils on a single 1.2m square canvas.

I then had the opportunity to experiment with live art, presence, intersubjectivity and Bohm Dialogue. My degree show piece was simply the documenting of me engaging directly with people in the town centre, in various ways. At the same time I was putting on experimental music gigs, sometimes live painting with a band on stage.

Dialogue is creativity, of intersubjective communication, using thought and the spoken word as the tools. Dialogue taps directly into the mechanisms of sense-making and conveyance and even beyond that, a form of cosmic collective communication. Bohm’s quantum science and my mystical learning experiences were coming together in 2008. During one session with about eight students and lecturers, I had the experience of witnessing what I can only describe as a large ‘bubble of intuitive energy’ hovering over our circle, enveloping us all at the same time, accompanied by a feeling of total congruence and love. After this major turning point I was to incorporate Dialogue into creative self-discovery workshops for refugees and home-schooled children, working with the concept of gallery as learning space, funded by the European government.

After a further burst of colour, in 2017 I settled into black paint and inks in a return to the foundations of writing and communication. Intrigued by a diagnosis of Asperger’s, I began working with Dialogue in the autism community and formed Dialogica. Many fundamental aspects of the self have dropped into place during this recent period and moreover, my visual art and dialogue practices are merging to produce an expanding new body of artwork.